How to Store and Plant Your Seed Potatoes

When you buy your seed potatoes, put them out to sprout in a cool well-lit and frost-free location. When sproutlets are about 2-3cm (in about 4 weeks or so) they are ready to be planted. Planting of earlies should be done between mid-March and April. Planting at the right time is very important for a number of reasons.

Earlies that are planted in soil that is too cold and wet could potentially rot while planting in soil that is too warm, may not grow well. The optimal time for planting seed potatoes is after the risk of hard frost has past, but while light frosts are still an occurrence. 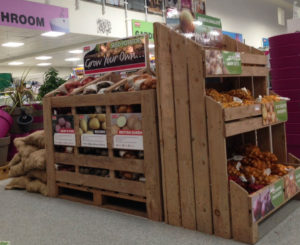 An advantage of early potato seeds is that they are lifted from the soil before they encounter problems such as wireworms, slugs and blight. First Earlies tend to be ready 15-16 weeks after planting in early April. Main crops planted from mid – April onwards are ready 18-20 weeks after planting, August through to late September. These take up the most space in the garden, but they are best varieties to store.

The entire crop is ready to harvest once the tops of the plants die off (Approximately 2-4 months after planting). You can leave the potatoes in the ground for a few weeks longer, as long as the ground is not wet. New potatoes are small, immature potatoes. You can harvest a few of these without harm to the plant, by gently feeling around in the soil near the plant, once the plant reaches about a foot in height. Harvest carefully by hand or with a shovel. Turn the soil over and search through the treasure. The Tubers can branch out and digging in with a fork is a sure way of stabbing a potato or two.